Book Review: The world for sale, by Javier Blas and Jack Farchy. 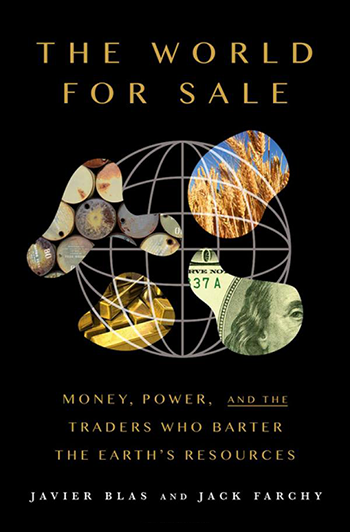 Some of our clients say they do not usually read business books. Here is a book that could be the exception. This one is engaging, very relevant and certainly does not disappoint. We all live in a material world. From the food we eat and the fuel we burn to the many other materials we use daily. So it is strange that we hardly think about the traders who get so many commodities from producers to us as consumers. The traders are critical players in the world economy and some of the most secretive and least scrutinised. In ‘The World for Sale’, two journalists who report on energy and natural resources for Bloomberg News rip the veil off this sector, exposing the often dubious and amoral ways in which some trading houses have amassed staggering fortunes. At times you feel you are reading a crime novel.

Blas and Farchy draw on their twenty years of reporting, during which they travelled to dozens of countries and spoke to business partners and government officials who deal with traders. Several of them are currently under investigation and what they reveal is only the tip of the iceberg. One former trader started his interview by saying, ‘What I’m going to tell you is not going to be the whole truth and nothing but the truth. There are things I’m just not going to tell you.’

The authors frame their history around four developments that allowed businesses to flourish. First was the arrival of the international oil trade. A second opportunity was the collapse of the Soviet Union in 1991. The third was the urbanisation of China in the 2000s. Lastly, it was the trading houses benefiting from the growth of the banking sector and the various developments in how the global economy is financed.

The book deals with many eye-opening examples of the willingness of commodity traders to deal with dictatorial regimes, trade in war-torn countries, engage in bribery and corrupt practices, and funnel dirty money through offshore companies – all in the pursuit of profit.

The story of Glencore’s decision to become a public company was a bombshell. It entailed tremendous scrutiny from investors, journalists and governments. As a result, Glencore was exposed, and the whole industry came under the spotlight. The authors warn that the traders’ days are far from over. A recent example is those who profited from the Covid 19 pandemic and used supertankers to store oil as prices nose-dived temporarily.

This book is compelling, and if you are a consumer who cares where their stuff comes from, put it on your list to read.